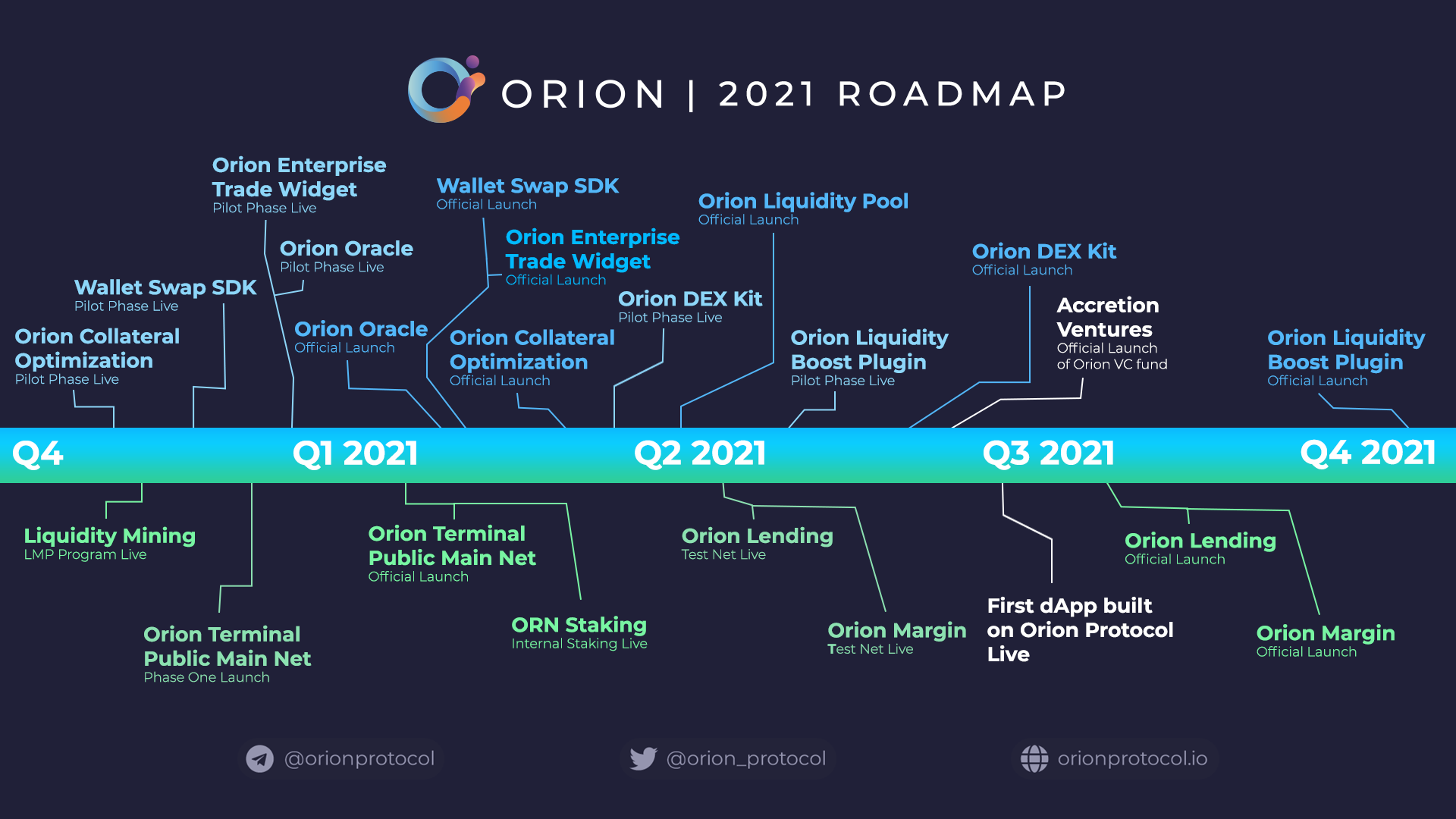 2021 is almost here. Having hit every milestone on our 2020 roadmap to date, we’re excited to announce our ambitious plans for the rest of the quarter and the year ahead.

Orion Collateral Optimization: Pilot Phase Live
Lending platforms require collateral. In the event that collateral for a loan decreases in value and hits its predetermined strike price for liquidation, immediate liquidation at the best price would be required to prevent the collateral from going under the value of the underlying loan. Orion Protocol’s liquidity APIs will allow for streamlined liquidation of assets across any exchange in the market. This will allow for the transaction of large quantities of assets strategically without the associated risks, allowing for the preservation of token value on the secondary market.
Pilot phase is currently live, with Bonded Finance our first integration.

Orion Liquidity Mining Program: Full Launch Live
Orion Protocol has launched a liquidity provider program on Uniswap to provide a decentralized alternative to its existing multi-exchange pre-staking initiative. The program will reward ORN Liquidity Providers (LPs) on Uniswap with up to 150,000 ORN per month for ORN/ETH. This reward amount will be distributed proportionally to the amount of liquidity each person provides, therefore the APR per person will depend on how many LPs participate.
The current APR at the time of publication is 136%, with over $4.6 million staked.

Orion Wallet Swap SDK: Pilot Phase Live
With traders increasingly storing their assets in wallets, why not remove any friction and allow decentralized trading of assets directly from users' wallet of choice? Orion Wallet Swap SDK allows users of third party crypto wallets the ability to access Orion’s liquidity via a swap widget directly integrated within the wallet’s interface. Wallet users will be able to swap crypto without leaving their wallet of choice, using liquidity of exchanges without the need for any exchange accounts. This will allow for the least slippage of any solution in market.
Pilot phase will be live shortly, with more information and key pilot partners to be announced.

Orion Oracle: Pilot Phase Launch
DeFi projects have been regularly exploited due to inefficiencies in price oracles. Orion Oracle enables the market-leading price oracle that is resilient to price manipulation due to price derivation from every order book in the market.
Pilot phase will be live shortly, with key pilot partners to be announced.

Orion Enterprise Trade Widget: Pilot Phase Live
Even non-crypto companies see that blockchain is the future, but the issue is the friction caused when getting a token to enterprise companies in order to pay for your project’s services. Orion Enterprise Widget acts as a middle layer between crypto projects with utility tokens and all available liquidity of the token on the markets, eliminating the barrier between token and client.
Pilot phase will be live this quarter, with key pilot partners to be announced.

Orion Terminal: Public Main Net Full Launch
Platform updates will be continually rolled out over the month following the phase one launch of Orion Terminal. Additional features to be added to the terminal though partners include leveraged ETFs, derivatives, contract trading, NFTs, and staking of any digital asset type.
Full public launch of Orion Terminal's main net is set for Q1.

Orion Oracle: Official Launch
After a test period with a number of leading DeFi projects, Orion Oracle will be live in Q1.

Orion DEX Kit: Pilot Phase Live
Blockchains need an ecosystem to be sustainable, but building a DEX can be extremely costly and time consuming. Our DEX Kit allows blockchains to build decentralized exchanges, specific to their chain, in just hours.
Pilot phase of Orion DEX Kit will be live in Q1.

ORN Staking: Internal Staking Live
Delegated Proof of Broker (DPoB) is the staking model that underpins Orion's ecosystem, built on a network of brokers and stakers fulfilling every function on the protocol with our native ORN token at its core. Brokers are chosen to execute trades based on how much ORN, Orion’s native token, they stake in the Decentralized Brokerage. Brokers receive a portion of fees from each trade they execute. Non-Broker Stakers stake ORN to ‘vote’ for their choice of Broker based on the variable reward share offered. Brokers are incentivized to offer attractive rates to Non-Broker Stakers to grow their stake, increasing their chance of being chosen.

Orion Margin + Lending: Test Net Live
Through aggregating the liquidity of and depth of all major centralized exchanges, Orion Protocol will be the first project to enable high-margin trading not seen on a decentralized platform. Orion users will be able to earn passive income on assets by lending their assets in our decentralized margin trading solution.

Orion Liquidity Boost Plugin: Pilot Phase Live
Having low volume can doom an exchange from day one, regardless of the cost, development hours, and business development that went into building it. Orion Liquidity Boost Plugin provides exchanges immediate access to the liquidity and volume of all exchanges in the market.
Several partners have already been announced as part of the LBP pilot phase in Q2, including Polkastarter and MobiePay.

AccretionVentures: Official Launch of Orion VC Fund
Orion sees the immense value that new projects using Orion’s solutions can bring to our ecosystem: a strong ecosystem equals growth. Orion is currently forming Accretion Ventures, a venture arm for funding, advisory, and incubation of projects focused on the development of the DeFi space. Accretion will soon begin to take applications for projects looking to take DeFi to the next level.
Partners and advisors will be released soon, with the fund live in Q2.

Earn priority access to Orion Terminal.
1. Sign up below to reveal your referral link.
2. Share your referral link across social media.
3. Every sign up through your link will increase your ranking.
4. First access will be awarded to those with the highest ranking on 12/15.
5. New users will be added each week.

Orion Protocol team growthOrion Protocol’s development as the world’s most advanced liquidity...
Get in Touch