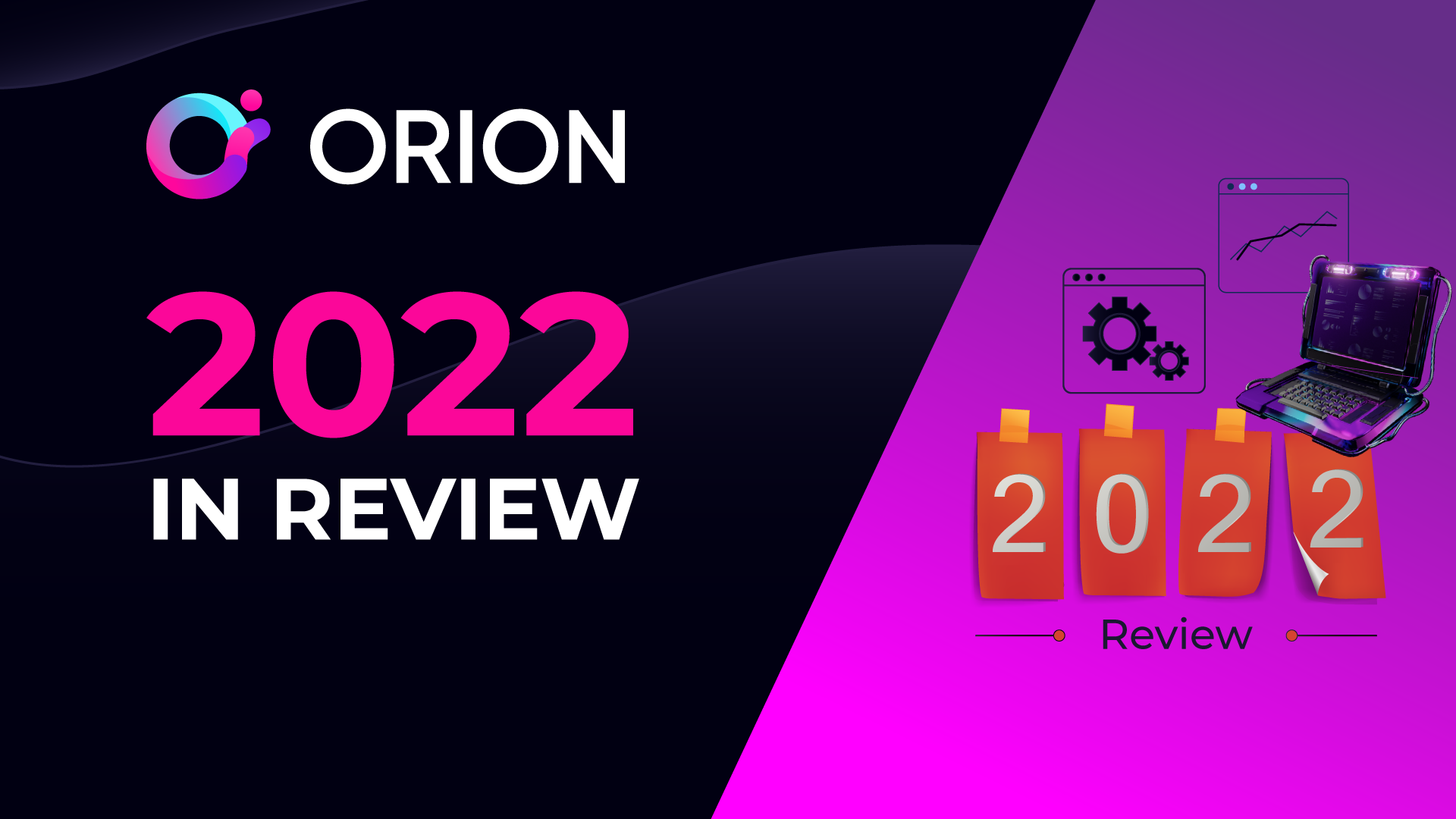 We've embarked on a huge amount of progress throughout 2022. Let's start with some of our favorites.

A turbulent 2022 for the Web3 industry has made its often destructive powers known throughout the space. Despite this heavy tide of resistance, Orion has continued to grow the team and go from strength to strength, building what is essential to a growing industry; an aggregated trading location with unmatched liquidity and accessibility across the largest exchanges in one place.

Progressing what is possible

Orion’s development team diligently applied their incredible talents throughout the year, creating industry-first solutions such as the launch of the world’s first Virtual Order Books, which combine simple and complex swaps together. This brings traders a more effective and valuable way of trading tokens on the Terminal for the best price.

The team fulfilled a cry from the community to integrate the biggest DEXs, and did so in style, implementing the largest decentralized exchanges for each of the integrated chains: Uniswap (Ethereum), PancakeSwap (BNB Chain), SpookySwap (Fantom) and QuickSwap (Polygon).

It wasn’t just the biggest DEXs, either. Orion added top exchange OKX to the aggregated exchanges on Orion Terminal ( now with Binance, KuCoin, OKX, AscendEX, Curve, Uniswap, PancakeSwap, SpookySwap, QuickSwap) and became the first to decentralize AscendEX’s liquidity - another centralized liquidity source available on Orion with your own wallet. Whereas the start of the year began with #OpenOrion which meant any token could list on Orion, the close of the year saw Curve liquidity also added adding a tremendous amount of liquidity to Orion's order books in an instant.

With depositless trading adding an even more streamlined look to trading on Orion, the launch of Orion’s outstanding blockchain Bridge totally rewrote the script of what is possible for bridge security in the Web3 industry. The very first atomic swap bridge enables users to perform secure transfers of tokens from one blockchain to another, L1-to-L1, without using the continuously problematic minting and wrapping of tokens like other insecure bridges.

With security being paramount for Orion, Orion’s CEO Alexey Koloskov accepted an invitation to become one of nine prestigious members of the Lossless Security Committee to review and resolve hacks in a decentralized way. This underlines not only Orion's detailed approach to safety, but also the team's expertise being recognized to be offered such a respected and important role in the industry.

First of many B2B solutions

18+ revenue streams must begin with the first. Enter Orion Swap Widget. 10+ integrations have followed with even more still to come, the latest of which being PRIMAL, each enabling projects to offer users direct access to the token that fuels their ecosystem through Orion’s powerful trading aggregation widget.

Amongst many of the social and educational content forms which Orion has produced consistently over the course of the year on a growing selection of platforms, including its own Discord server, new listings for ORN and collaborations with team partners have brought increased awareness to the project around the world.

Orion Protocol has added elite CEXs, DEXs and blockchains to its trading aggregator, atomic swap Bridge, VOBs, new chains, tokens, ORN listings, depositless trading, the first B2B solution and much, much more throughout 2022. Take a look via our Telegram News channel to see what we've achieved.

Each element the team has worked on makes Orion’s liquidity stronger, giving you more access, more value: all from your own wallet.

Looking Forward in 2023: Orion Protocol and the Crypto World

Looking Forward in 2023: Orion Protocol and the Crypto World Another year, another opportunity 2023...
Get in Touch