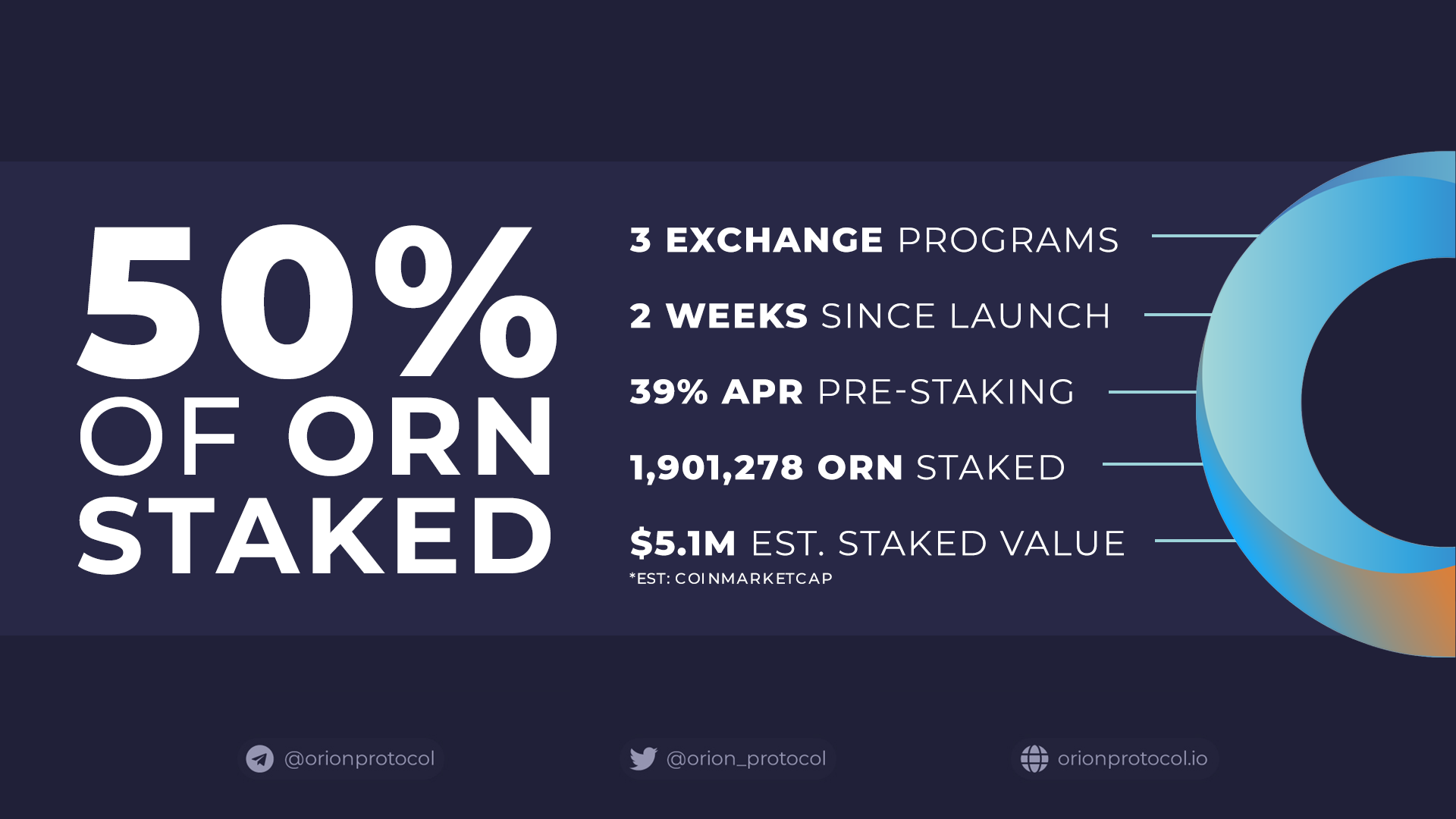 In just two weeks, 50% of circulating ORN has now been pre-staked.

Less than a week after listing, Orion Protocol developed an initiative to facilitate and incentivize staking, prior to the launch of Orion’s internal staking program in Q4. Through a lucrative multi-exchange pre-staking program, Orion Protocol’s ORN token can now be staked on Bitmax, KuCoin, and Biki for staking rewards at a 39% est. APR.

In an unprecedented fortnight since the launch of Orion Protocol’s pre-staking initiative, an incredible 50% of ORN’s circulating supply has now been staked.

The program provides immediate staking incentives to ORN holders that are traditionally only made available to developers and validators, prior to the launch of Orion’s internal staking program in Q4. Governing Orion Protocol from Main Net launch in Q4 will be the proprietary, non-inflationary staking mechanism, Delegated Proof of Broker - poised to be the ‘most profitable staking in DeFi’. This mechanism fulfills every function on the protocol from order execution, to clearing, to the governance of choosing a broker, and everything in between, via a decentralized brokerage with the native ORN token at its core. Learn more.

With 50% of ORN staked in just two weeks since launch, are you taking part in what could be the most profitable, and most popular, staking in DeFi? Stake on Bitmax, KuCoin, and Biki now.

Registered in Singapore, BitMax.io is a leading digital asset trading platform with a broad range of financial products and services for both retail and institutional clients, with robust product design ranging from innovative volatility products to margin trading and other investment solutions. Since launch in 2018, it has established itself as a top institutional-grade trading platform with $400M daily trade volume.

Founded in September 2017, KuCoin has grown into one of the most popular crypto exchanges, and it currently provides a series of financial services including fiat-to-crypto, crypto-to-crypto, futures, staking, borrowing, token launch and more to its 5 million users across 207 countries and regions around the world. In November 2018, 'The People's Exchange' officially partnered with IDG Capital and Matrix Partners.

Founded in August 2018 and headquartered in Singapore, BiKi.com is a global digital currency trading service provider. With a strong technical team and operations team, the platform is committed to creating the safest, most stable and efficient digital currency trading platform for users around the world. At present, it has supported many languages ​​such as Chinese and English, and serves nearly 100 countries and regions, with over 2 million users worldwide. BiKi has launched a subversive “ mining, buying back and destroying, rising and falling” model where 100% of the platform fee was used to repurchase the platform currency and destroyed them. Du Jun, the former co-founder of Huobi and the founder of Golden Finance, has jointly participated in the establishment of BiKi.com, and personally invested 5 million US dollars and served as the co-CEO of BiKi.com.

Orion: KuCoin’s DeFi Project With the Most Potential?

Across over 2,000 recommendations, Orion Protocol has been nominated as one of the two candidates...

Just a few hours prior to ORN's listing on KuCoin on July 25th, Orion held an AMA with Johnny Lyu,...