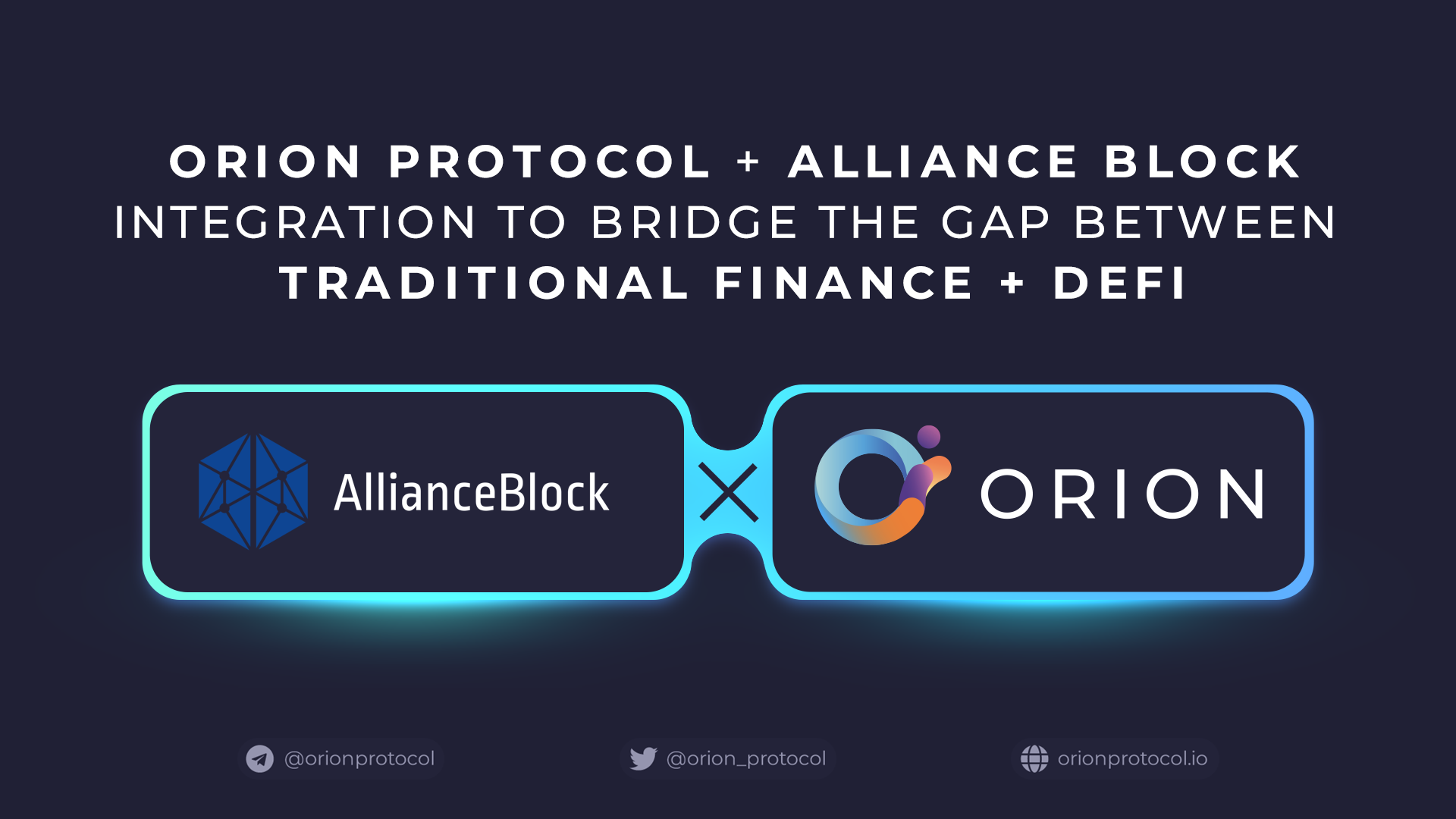 Core to the philosophies of both organizations is the desire to make blockchain and crypto accessible to the masses in a compliant, secure, and simple way.

AllianceBlock, the protocol enabling the world’s first globally compliant decentralized capital market, is building the bridge between traditional finance and digital capital markets by unlocking trillions of dollars in capital and allowing it to be utilized in decentralized finance in a compliant manner.

The partnership between AllianceBlock and Orion Protocol presents an industry-changing opportunity to offer secure, compliant, non-custodial, and streamlined crypto trading to a multitude of traditional finance entities, including private banks, wealth managers, and funds.

Orion Protocol CEO, Alexey Koloskov, said “Orion Protocol’s mission is to create a sustainable future of DeFi, which requires mainstream adoption of the space. Traditional finance entities have been slow to capitalize on crypto markets due to a fragmented market structure, alongside issues of security, compliance, and regulations. Working with AllianceBlock, we will provide the likes of private banks, wealth managers, and funds a singular, compliant, and non-custodial point of access to the crypto market - funneling new users and significant capital into the space.”

AllianceBlock CEO, Rachid Ajaja, said “We have been working on AllianceBlock for over two years now and are eager to embark on this next phase of our journey. Our primary focus now is building our protocol and growing the AllianceBlock ecosystem with aligned partners to help us fulfil our vision. The opportunity here is very real and alongside Orion Protocol we are confident that we can be the catalyst for a paradigm shift in global capital markets and help usher in an exciting new era for DeFi.”

Built on the most advanced liquidity aggregator ever developed, Orion Protocol solves some of the largest issues in DeFi by aggregating the liquidity of the entire crypto market into one decentralized platform. Governing the protocol is the proprietary staking mechanism Delegated Proof of Broker, fulfilling every function via a decentralized brokerage with the ORN token at its core. This underpins each industry-critical solution built on the protocol, including the flagship product Orion Terminal: aggregating all major exchange liquidity into one decentralized terminal. Orion Enterprise provides much-needed solutions for businesses in the space, including blockchains and exchanges, while their roadmap includes a price oracle and a high-margin DEX.

The AllianceBlock ecosystem seeks to return control of private data to participants, democratise access to securities, and distribute governance to all stakeholders using cryptographically-secure blockchain technology.

Equalizer to utilize Orion Liquidity Boost Plugin and bring further utility to ORN for flash...
Get in Touch