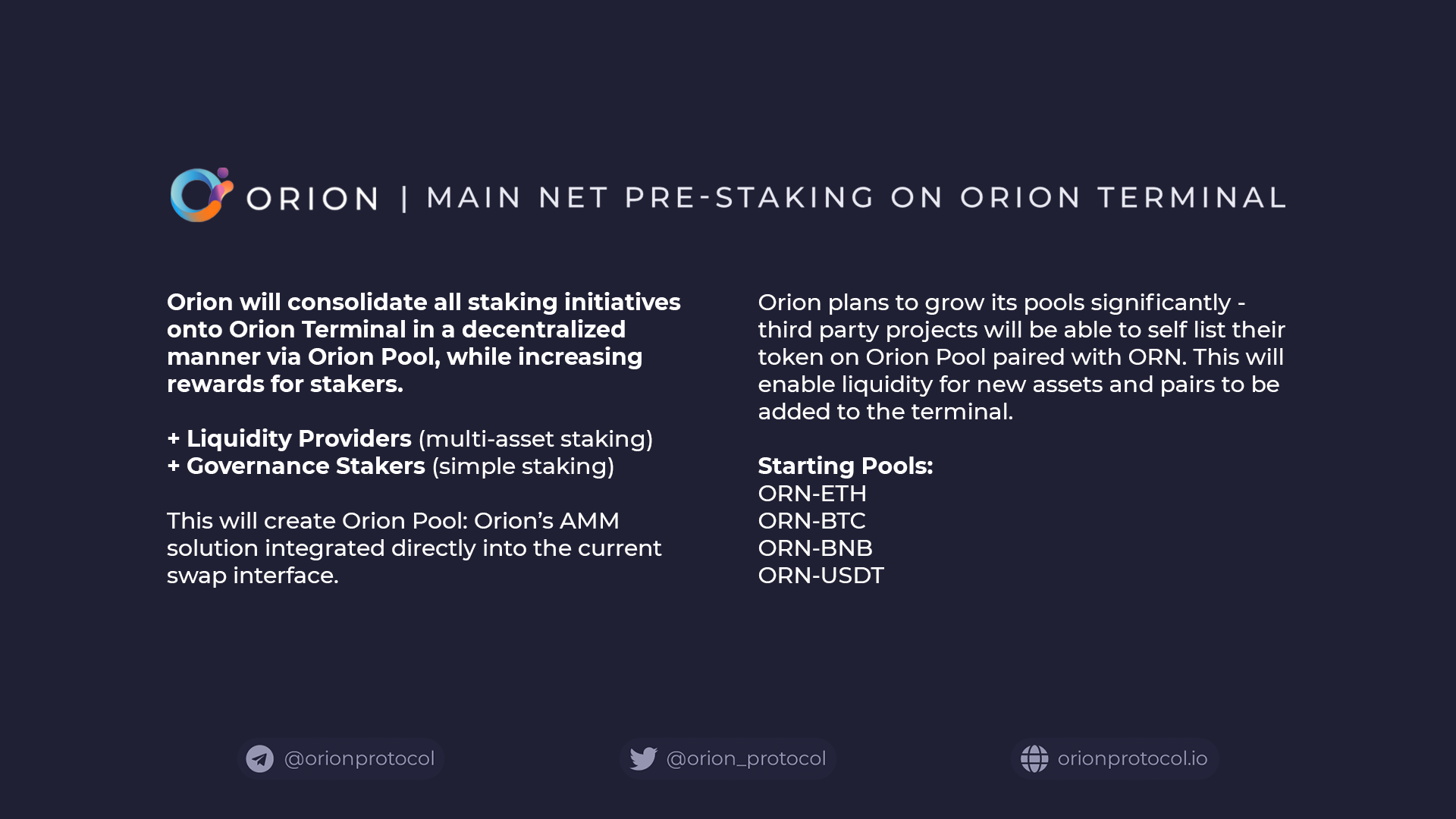 
Orion Protocol has prioritized rewarding ORN holders since TGE last June - immediately launching pre-staking with our partners AscendEX and KuCoin. Since then, we’ve seen an ATH TVL of 70%, with millions of ORN staked and lucrative rewards being paid out. In November, we launched our Liquidity Mining Program as a decentralized alternative to our CEX staking, with 150,000 ORN in rewards per month.

While we continue to increase Daily Protocol Volume ahead of Main Net Staking, we’ve listened to our community and understand their desire for decentralized staking on the Terminal. We’re combining two existing forms of pre-staking in the form of ‘Main Net Pre-Staking’ on Orion Terminal. ORN token holders will be able enjoy staking rewards, governance, and added utility directly from the Terminal, without losing custody of their ORN.

This liquidity will create Orion Pool: Orion’s AMM solution integrated directly into the current swap interface to create a seamless experience for the end user. As usual, Orion will route all swap orders to the liquidity source with the best possible price. Whether it’s an external DEX, CEX, or internal within Orion Pool - users will experience the most profitable rate for their swap from one interface.

How will this work?

There are two forms of staking in Orion’s Main Net Pre-Staking:

As per typical liquidity mining programs, Liquidity Providers will provide 50:50 ORN and the matched asset. Liquidity providers for Orion Pool will benefit from multiple sources of income: swap fees from the AMM pool, farming rewards via Orion’s Liquidity Mining program, and ORN staking rewards generated from all of Orion’s products.

Orion’s CEX Pre-Staking on centralized exchanges will migrate to Orion Terminal, creating a simple and decentralized way for ORN holders to earn staking rewards. These rewards will be a higher APR than the current rates available on CEXs.

In addition to voting for Liquidity Mining reward share, ORN Governance Stakers will also be able to use their staked ORN to vote for future assets on Orion Terminal.

Initially, Orion Pool will launch with four ORN pools including ORN/ETH, ORN/USDT, ORN/BTC, and ORN/BNB. We plan to grow our pools significantly - third party projects will be able to self list their token on Orion Pool paired with ORN.

Instead of needing to build out their own custom LM Program, projects will be able to immediately leverage the built in LM Program that is integrated into Orion Pool.

Furthermore, they will be more inclined to list their token on Orion Pool over Uniswap in order to access Orion’s whitelabeled Liquidity Mining Program. This will enable liquidity for new assets and pairs to be added to the terminal - increasing assets and pairs exponentially.

Orion Protocol adds even deeper utility to ORN by launching USDo stablecoin.
Get in Touch