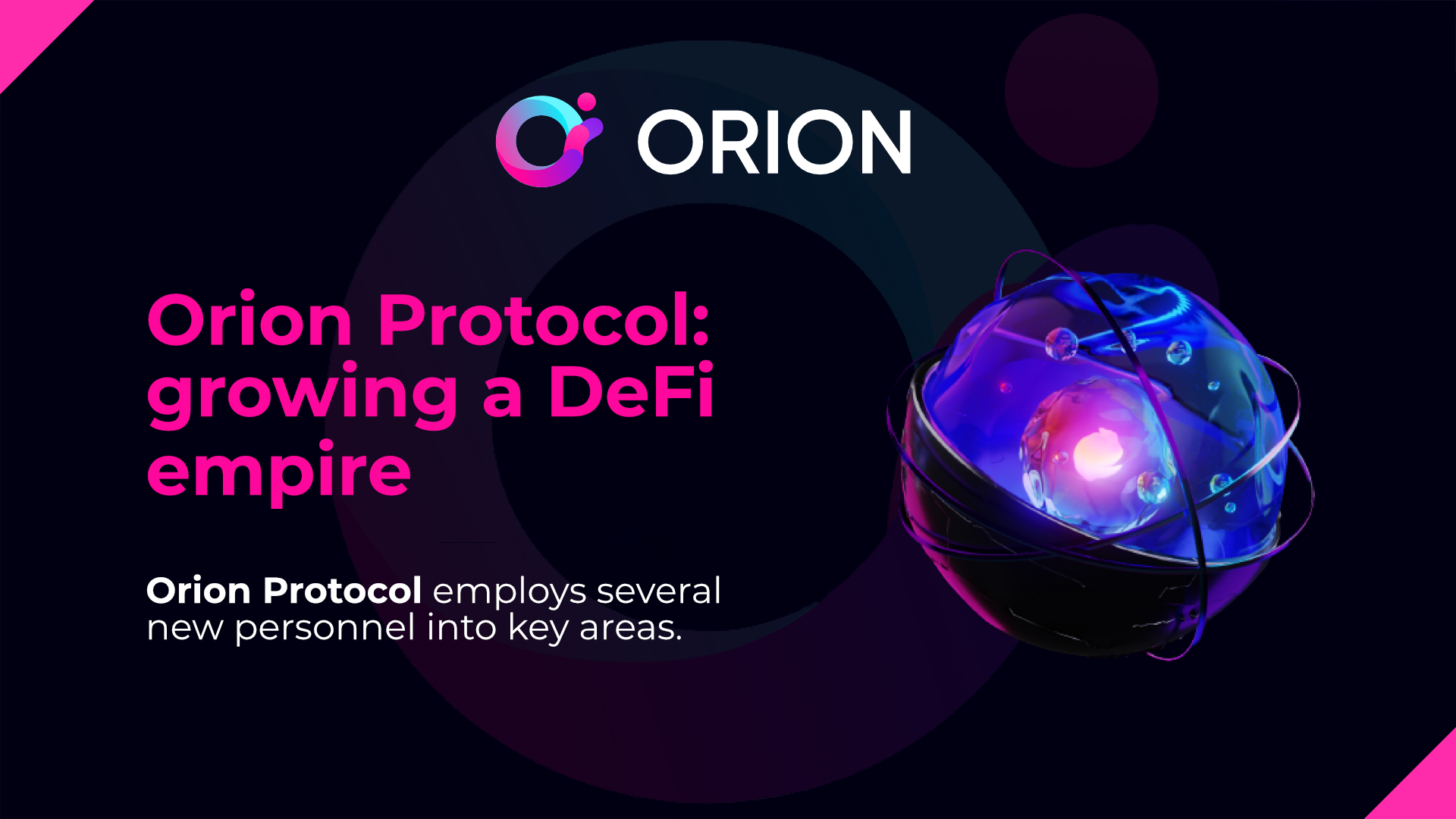 Orion Protocol has grown at a considerable rate since its inception in 2018 as CEO and Co-Founder, Alexey Koloskov, and COO and Co-Founder, Kal Ali, embarked on a vision to decentralize centralized liquidity by combining CEXs, DEXs and swap pools into one location. Orion Terminal. ORN’s unique DYCO fundraise set pulses racing as “2020’s most successful Token Sale”, whilst being featured in the likes of Entrepreneur, Yahoo Finance, Start Up Fortune, and several other prestigious media outlets.

Orion Terminal’s public Main Net launch unveiled the world’s first decentralized liquidity aggregator on March 31st 2021 with hundreds of thousands of hits to the Terminal in seconds. This launch set a new precedent in the world of DeFi as it lets users connect to centralized order books directly from their own wallets without needing to create an account or provide personal data. The vision became a reality and has continued to grow since then with a new chain addition, depositless trading, fiat on/offramping, SolarFlare community IDOs, Orion Bridge and a lot more to come.

Through the vast exposure of a rapidly scaling company, and the excitement of brand new features solving numerous industry limitations, Orion Protocol’s dedicated and hugely talented development team has continued to grow, led by CEO, Alexey Koloskov. The core team has remained the same, however, even with the company gaining increasing exposure. As Orion moves into its next phase of worldwide growth, adding new brokers, chains, assets, B2B products and more, the need to align this with an expanding team of specialist professionals is also required in order to keep up with the demands of being the first and only decentralized liquidity aggregator in the industry.

To place emphasis on this new accelerated phase of team growth, Orion Protocol has already filled several key roles as it looks to rapidly add to its team, covering areas designed to help develop new aspects of the business.

Community is one of the most important parts of any successful cryptocurrency project. Behind the enthusiasm of avatars and frequent social activity, there are real people, with real lives and quality professional skills just waiting to be utilized. Orion wants to access that talent, and has done so by making sure each new recruit is already heavily immersed in the Orion community and keen to use their professional skills within Orion Protocol.

Business development + operations
Stéphane Doueihi has joined the team as Director of Business Development + Operations. Stéphane has already put in place several structural improvements to prepare for the next phase of accelerated growth, identifying areas for additional job roles, communication streamlining, and talent development with Orion. Particular attention has been paid towards increasing knowledge and productivity between the developers and the rest of the team, maximizing the potential information harvested from the incredibly talented development team. Stéphane will also liaise with other teams, forming exciting collaborations with current, and future partners for listings, integrations, business development, and more.

Developers
The Development team is already 40+ members strong and continues to increase as more features are created for Orion Terminal. The front end, back end, and QA team have grown with the guidance of Alexey Koloskov, ensuring each new and pivotal product is implemented with care and precision. Community member ‘Helios’ has also joined the team, expanding upon his ORNscan project, funneling the same creativity and technical ability directly into Orion Protocol.

Community/team liaison
‘Kap’ (formerly known as ‘Kapano’), another respected and vocal Orion Aviator, brings a wealth of interaction from the Orion community and Orion Protocol itself. Kap’s Community Manager role provides a key link between the team and the community to drive interaction, making sure everyone’s voice is heard and important feedback is shared. Being a ‘finance guy’ with working experience in a senior manager position at one of the ‘big four’ audit and advisory firms, ‘Kap’ will also help Orion to improve on these aspects within the internal organization.

Technical + translation
‘Crypto Toad’, a long-standing Orion Aviator, allies his years of expertise in technical writing and translation to effortlessly bridge the informational flow from the developers to the rest of the team. Toad’s presence at Orion enables digging deeper into the technical aspects of this first of a kind Terminal with far greater detail which can then be reproduced in additional content and educational materials.

Community
The Community Moderator team has been steadily growing. Recent additions of Glorida and Chosen Gladiator, with more to come, allows the Community team to widen our community reach, covering more areas and platforms, naturally bringing new users, attention and education to Orion Protocol. The strong core of ‘Aviator’ support forms an important part of this knowledgeable community and the team continues to work closer with them, taking onboard and actioning any feedback from Orion’s supporters whenever possible.

Marketing
The Marketing team has been led by the exceptionally talented and incredibly gifted CMO, Timothea Horwell. Timothea has been with the team since 2019, giving every ounce of effort possible to make Orion’s vision come to fruition in her own unique and exquisite style: impeccable, articulate, elegant and courageous. Numerous all-nighters, numerous front-facing appearances at AMAs, major blockchain events, communications, community appearances and a tremendous amount of hours spent outside of her remit of Chief Marketing Officer have been the norm, such is the passion which bestows her personality.

Timothea has lived and breathed Orion for three years - quite literally. With all of the multitude of often impossible workloads accomplished and milestones achieved, this unbelievable CMO has played a monumental role in the Orion you see today, regularly defying the odds and achieving elite success. Today, Timothea steps down from Orion Protocol to pursue new dreams and goals away from Orion.

The entire Orion team wishes to sincerely thank Timothea for her resilience and unbreakable efforts throughout her time with the company and we all wish her the very best for whatever venture she decides upon.

With one incredible team member retiring from Orion, new opportunities arise as the Marketing team expands. Marketing Manager Andrew Kirk, who has worked side-by-side with Timothea for over two years at Orion, and has been around the company since the start of 2019, steps into her position. With both Timothea and Andrew working so closely throughout that time, the transition is almost seamless and has already been in place throughout March. New roles have also been identified, with community member ‘CryptoFunded’ now being appointed Marketing Coordinator, assigned to organize, prepare and coordinate content for the marketing team. This is soon to be supported by an additional designer, social coordinator, copywriter, marketing manager and more as the team distributes additional resources across a wider personnel, strengthening the entire team’s workloads moving forward.

The Orion Protocol team is growing as we hire specialist team members to evolve our advancing position as the decentralized gateway to the crypto market. If you possess exceptional skills which can propel Orion further, as a developer or another suitable role, please follow our careers page and get in touch. We look forward to hearing from you.

With the integration of AscendEX as Node Validator (Broker) already completed, focus is set on the major integrations of Fantom, Orion Swap Widget, Crypto.com, and DEX integrations of Uniswap, PancakeSwap, SpookySwap and much more. Each new milestone enhances Orion Terminal’s capability to deliver a world class, decentralized trading experience for users from their own wallet, without limits or accounts, and always with global access.