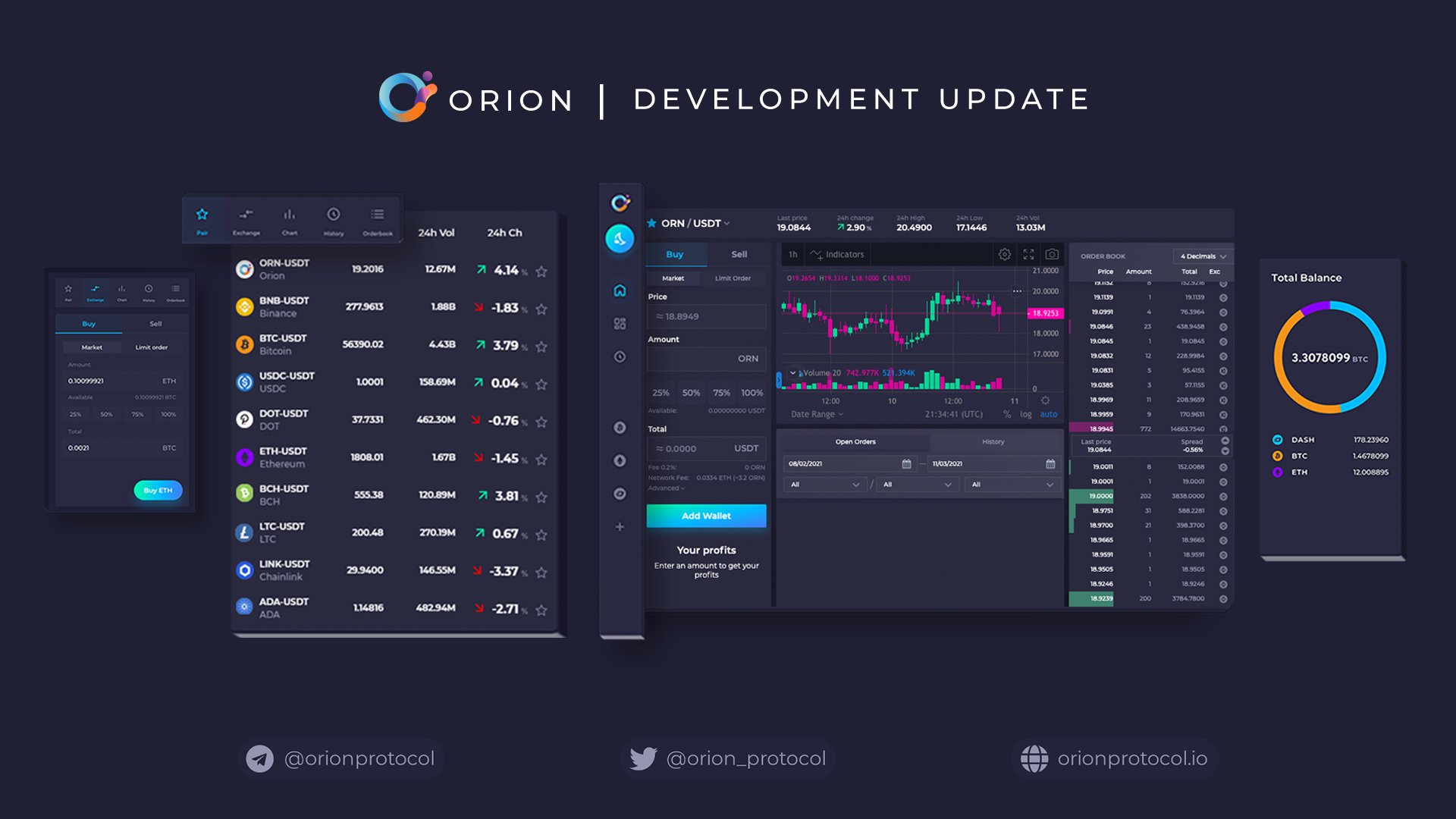 May 24th: From an internal standpoint, Orion Main Net Pre-Staking mechanism is ready, but the full-scale security audit is still on-going. While it is close to completion, we had anticipated the audit to be completed by this point based on previous audits. However, the system we have built is unique in market and therefore has required more time to ensure it is fully secure and immune to malicious actors in the space.

While we want Main Net Pre-Staking to be live as soon as possible and understand the community do too, security is of utmost importance. With the expected increase of TVL on the terminal, ensuring the full-scale security audit is carried out and successfully completed is critical for us to continue to protect users’ assets. Our mission has, and always will be, to allow users to interact with the crypto space while ensuring the safety of their assets.

This will never waiver, and we will continue to prioritize safety across our protocol. We have been informed by the team that the audit has almost been completed and we will be sure to continue updating the community on its progress.

With the audit in mind, we’ve crafted a module that will make it extremely easy to transfer your liquidity from uniswap to Orion. This will enable existing Uniswap LPs to automatically transfer liquidity, making it significantly easier and quicker to begin Main Net Pre Staking from existing pre-staking initiatives.

More liquidity: Looking forward, there are a number of exciting developments in the pipeline. Once Orion AMM is live, we will be integrating a number of major swap pools into Orion Terminal, including Uniswap, PancakeSwap, and SushiSwap. Furthermore, we have a growing number of third party projects ready to self-list on Orion Pool's launch, bringing new assets and greater liquidity to the Terminal.

More volume: Driving volume to the protocol is of utmost importance to us, and our B2B solutions play a critical role in that. The team has made significant process on a number of B2B solutions ahead of our roadmap, and we are underway with onboarding a number of our clients.

We will continue to honor the 7 day notice period to allow holders to unstake from existing CEX staking initiatives.

April 27th: It’s been almost four weeks since the launch of Orion Terminal. The focus of the last week has been on increasing the stability and security of the system in response to both external and internal factors:

This week, our focus is on:

Our next major milestone is launching Main Net Pre-Staking on the terminal via Orion AMM. This will be live in May.

April 11th: It’s been just eleven days since the launch of Orion Terminal, and we have an incredibly exciting roadmap ahead of us. As a decentralized gateway to the digital asset market, Orion Protocol has been, and always will be, chain-agnostic. Orion Terminal is currently on Ethereum and Binance Smart Chain, with Cardano, HECO, Avalanche, and Elrond to be integrated over Q2 and Q3. More chains will be announced imminently.

While we work towards aggregating the market in its entirety, the hardest part has been achieved. DEX and swap pool aggregators already existed, but for the first time ever, we are providing decentralized access to centralized liquidity. Our main net was a huge step towards that. We’ve already built the underlying framework and the proprietary tech that governs our liquidity aggregator; now, we’ll continue to build to create the portal to the digital asset market.

Once again, thank you for your support to date: all terminal feedback is reported back to our development team and is addressed in order of level of priority. Over the last week, the team have prioritized the following:

While we continue to build and develop Orion Terminal, we have an exciting week ahead of us, with a number of major partnerships, products, and integrations to be announced.

April 5th, 2021: It’s been just over five days since trading began on Orion Terminal. Despite a hectic start (with hundreds of thousands of visitors to the terminal within seconds), we’re incredibly pleased with progress so far and will continue to build to meet the demands of our traders on our road towards the future of trading.

We’d like you to consider for a moment why there are so many clones or forks of Uniswap, but few projects building their own proprietary tech. It’s a huge task to build a project from the ground up - one that will revolutionize trading - but that’s what we’re doing. Development takes time, and we’re committed to delivering a revolutionary solution that addresses key industry issues: fragmentation, centralization, and liquidity.

Since launch, there have been a number of areas raised by traders that we’d like to address:

Infrastructure: In response to rapidly growing demand, we're hard at work building a solid, performant, and secure foundation for our users. A lot of work goes into our internal tooling to allow developers to deploy more features faster and more efficiently, as well as detecting any possible issues before they reach our users. Many conversations are happening internally about opening up parts of our infrastructure for more transparency and community involvement, as we move towards our goal to become open source. In the meantime, we have to prioritize security and satisfaction of our users first, increasing visibility as we mature as a platform.

Volume: We’re incredibly pleased with the volume so far (outpacing a number of DEXs already) and will continue to work to drive more volume to the protocol in our work towards main net staking. Before the end of the month, we will share terminal metrics and volume in a Terminal Performance Dashboard. Meanwhile, we’re making progress with several of our B2B solutions, each of which will drive significant volume to the terminal.

Pairs: It's important to note that there's just a lot more to our token/pair onboarding than there there is for a traditional exchange. This technology is completely unique, and so we want to be sure we have stress tested every single token we add - as well as every single possible trade of that token with every other token. Naturally, this process will speed up and become more automated over time.

Currently, there are 33 tradable assets on the terminal across two chains, resulting in 516 tradable pairs via complex swap. We will have two methods of adding new tokens to the terminal in order to accelerate pair growth:

Binance Bridge: The development team is close to launching a seamless integration of Binance Bridge into the terminal, the first BSC partner to do so. This will allow MetaMask users to trade assets on BSC while being connected to the Terminal on the Ethereum network. We plan to have this bridge live by the end of the month.

Staking: We’re also working hard on the implementation of main net staking on the Terminal. Our complex network of brokers, non-broker stakers and proprietary staking mechanism makes our system unique to any other staking in crypto. We will reveal timelines closer to launch. Leading up to this time, we will guarantee the community and our ORN token holders that they can continue to earn competitive rewards through our CEX pre-staking and liquidity mining program.

Sign up to be notified about Orion's latest developments.