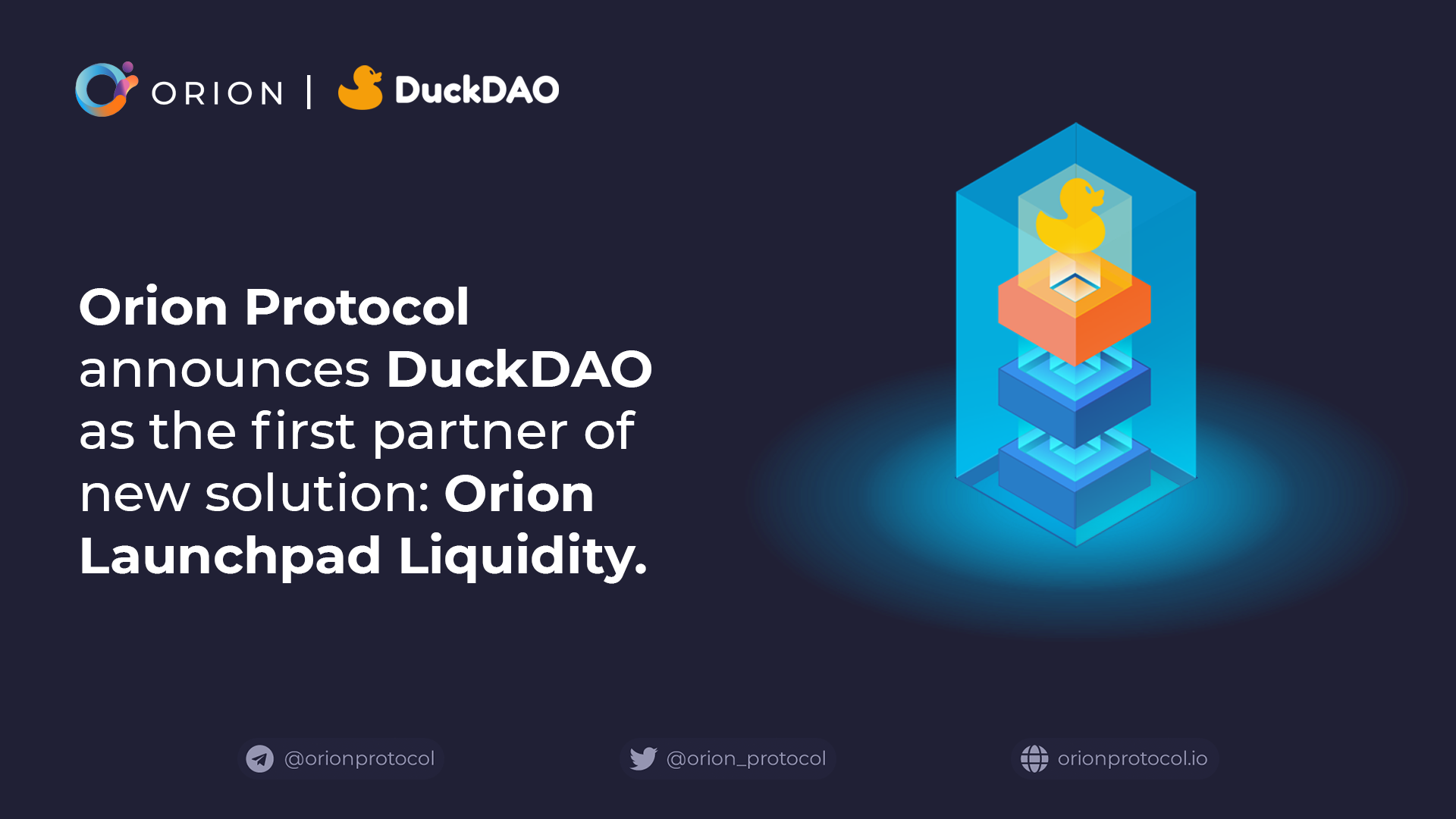 Orion Launchpad Liquidity: the fuel to the launchpad ecosystem

Orion Protocol announces DuckDAO as the first partner of Orion Launchpad Liquidity: enabling launchpads to list incubated projects on their own swap DEX with the liquidity of the entire market.

The Launch of Launchpads

There’s no doubt about it, crypto summer is here. As with the last major bull run in 2017, new users and capital are flowing into the space. Unlike 2017, however, strides have been taken to legitimize the industry, particularly when it comes to fundraising. In 2017, the primary method of collecting funds was via ICO. Yet according to the Statistic Group research, almost 80% of ICO projects at that time turned out to be a scam.

As the industry becomes increasingly legitimized by institutional adoption, we’ve seen the emergence of crypto launchpads like DuckDAO, Poolz, Polkastarter, and Paid’s Ignition, and plenty of new crypto projects opting to raise capital on these launchpads. Launchpads typically provide a safer and more accessible platform to raise funds, acting as a vetting process for new projects to project investors, while enabling the incubation of a community around these projects - creating a network effect between platform and project.

Yet while the emergence of launchpads solve critical issues in fundraising, there are still improvements to be made to the current model. Typically, it’s a three part process: launchpads raise funds on their platform, release digital assets to investors, and then the token is listed on another platform such as Uniswap several hours after.

Orion Protocol identified two issues in the current model, from both a user and launchpad perspective. For the end user, there’s a disconnect between fundraising, distribution, and the secondary market, resulting in a diminished user experience. As a result of this disconnect, the launchpads are unable to further monetize projects beyond initial raise, despite having been integral to the launch.

Instead of releasing another competitor launchpad into the already growing space, Orion Protocol has stayed true to its mantra of ‘don’t compete, but complete’ by launching the missing piece to the launchpad solution. Orion Launchpad Liquidity enables the launch of incubated projects on the launchpad’s own platform, via a seamless whitelabel swap DEX with the liquidity of the entire market.

This removes the friction between raise and listing, while allowing launch pads to monetize beyond IDO. Incubator project DuckDAO will be the first to utilize this solution: building DuckSwap on Orion’s whitelabel swap solution. In doing so, launchpads like DuckDAO will be able to launch their own incubated projects directly on their own swap: reducing friction, improving customer experience, and generating revenue.

Typically with launchpads, there’s a disconnect - and delay - between fundraising, distribution, and the secondary market. This delay can often pose a security risk, with fake tokens being listed on the likes of Uniswap ahead of the official listing. By listing the project directly, and immediately, on the launchpad’s swap, this mitigates the risk of fraudulent listings.

Additionally, this disconnect is likely to alienate users who unsuccessfully tried to get into the public sale on the launchpad platform; the expectation is that these users will spill over into the secondary market, but drop off is to be expected with multiple platforms and delays. By removing this friction, the launchpad is likely to increase initial participation upon listing.

While any launchpad can create their own swap to facilitate this, liquidity is not guaranteed. With any new exchange or swap product, the liquidity will always be low on launch - regardless of the liquidity provider incentives. Orion Launchpad Liquidity enables bottomless liquidity to the launchpad’s swap platform, while practically eliminating slippage for the end users.

This will allow for launchpad projects to generate revenue not only on transactions for incubated projects, but every transaction on their swap (including trades involving tokens they didn’t incubate).

The launchpad is an integral aspect of the success of a project and should benefit from secondary market trading of the project, as with IEOs. Not only does Orion Launchpad Liquidity allow launchpads like DuckDAO to further monetize their existing business model, but enables them to complete their ecosystem through the development of their own platform to trade assets directly on their platform. As such, Orion Launchpad Liquidity enables launchpads to reach new audiences, build additional revenue streams, and accelerate platform growth.

“We are excited at the prospect of launching our new swap protocol with Orion as a partner on our side. This partnership will reveal a trove of opportunities for DuckSWAP to grow and succeed in the long-run.” said DuckDAO spokesperson

“We’re pleased to be working with DuckDAO as the first partner to utilize Orion Launchpad Liquidity. By building a swap protocol integrated into their platform and connected to the liquidity of the entire market, we believe we have built the missing piece to the launch pad ecosystem.” Alexey Koloskov, Orion CEO + Co-Founder

Orion Launchpad Liquidity adds to an already impressive stack of liquidity solutions from Orion Protocol. Their flagship product is Orion Terminal, the decentralized gateway to the entire crypto market, while their B2B offering includes a price oracle, liquidity boost plugin, DEX kit, among others. This solution brings yet another revenue stream to the protocol, bringing the total number to an unrivaled seventeen revenue streams - each stream increasing staking rewards for ORN holders.

Fuel your launchpad. Get in touch below.