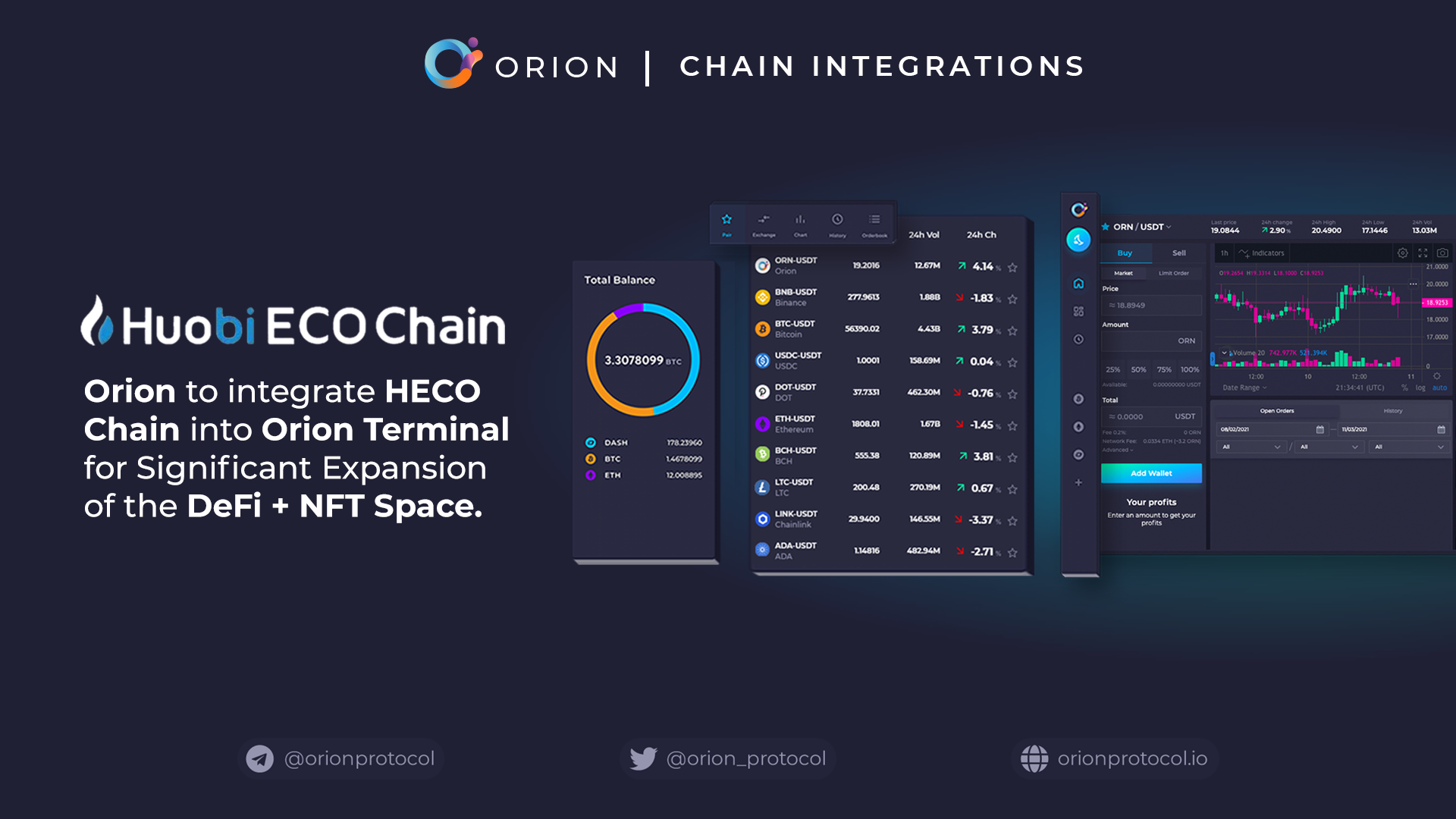 Orion Protocol, the chain-agnostic liquidity aggregator building a decentralized gateway to the entire crypto market, reveals HECO chain as the latest chain to be integrated into the protocol in an integration aimed at significant expansion of the DeFi and NFT space. This follows recent integrations with Binance Smart Chain, Avalanche, and Elrond, with more chains to be announced.

Orion Protocol will provide a non-custodial gateway to the entire digital asset market - aggregating liquidity across decentralized and centralized crypto exchanges and swap platforms in one, decentralized platform. In doing so, Orion seeks to solve the fragmentation of crypto markets, as well as assets from traditional finance and NFTs. Orion Terminal's main net will be live at 5pm UTC on March 31st.

HECO is a decentralized, high-efficiency, and energy-saving public chain that Ethereum developers can easily get started with as smart contracts are seamlessly compatible. HECO chain has various core functions such as HPoS-based consensus mechanism, reward based on node contribution, cross-chain bridge within the HECO platform, and meta-transaction. HECO chain intends to subsidize users by paying a part of their gas fee in accordance with their HT holding volume. In addition, special gas fee subsidies could be given for specific dApps.

Building Orion NFT Aggregator on HECO Chain
Orion Protocol will be the first platform that sits between the end user and the entire digital asset market. Now, through the development of Orion’s industry-first NFT aggregator, this will include NFTs. Through this integration, Orion NFT Aggregator will be building on HECO chain to drive the accessibility and volume of H-series NFTs. This will provide an additional point of access to listed assets, driving significant volume to their marketplace and visibility for sellers.

Going forward, the pair will collaborate on the launch of upcoming H-series NFTs through significant cross-marketing and PR, while showcasing new launches within the premium ‘featured’ section on Orion Terminal.

Orion Protocol Expands to Polkadot by Integrating Moonbeam into Orion Terminal Orion Protocol, the...
Get in Touch