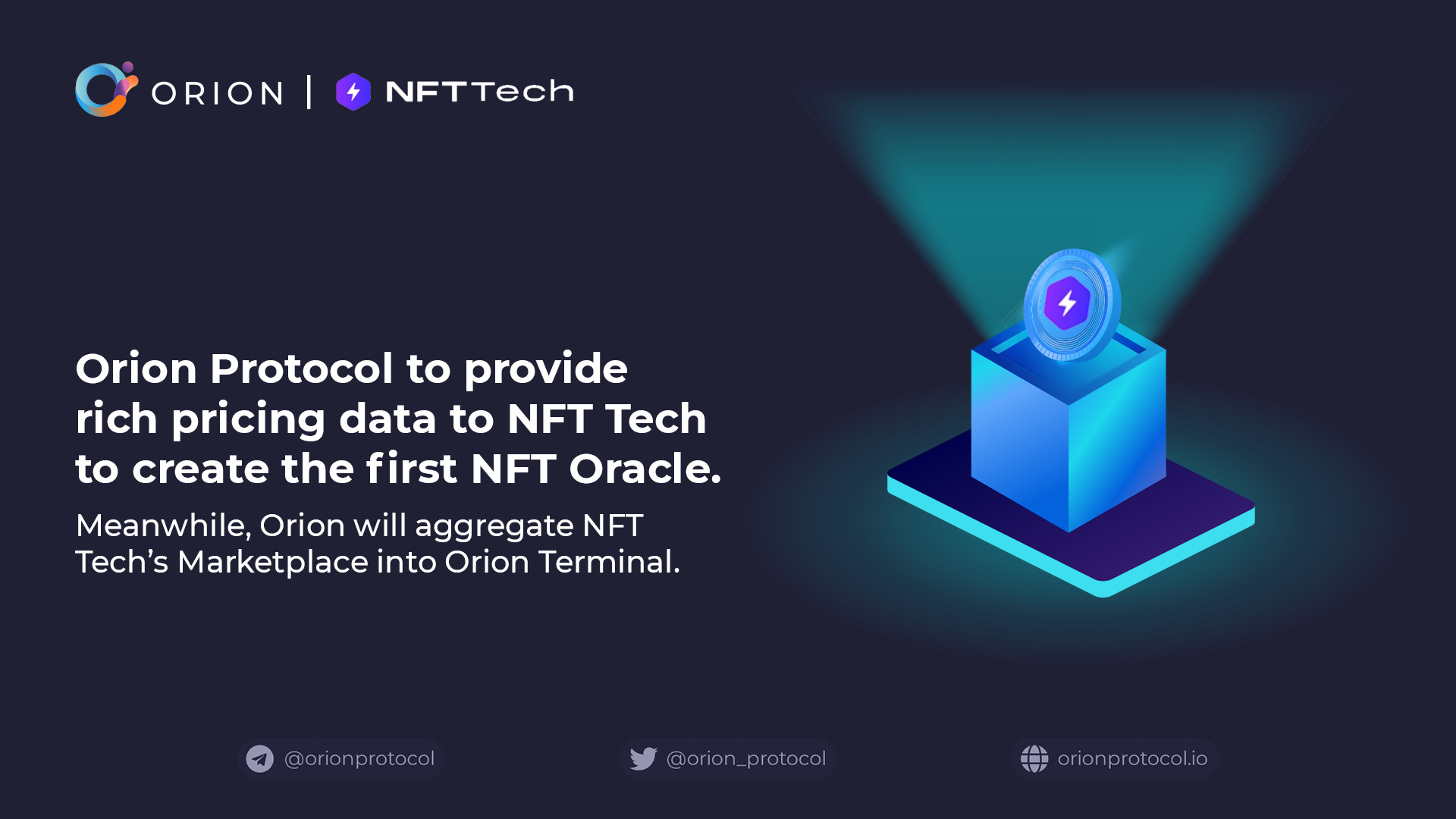 Orion Protocol is building the first NFT Aggregator: aggregating all major NFT marketplaces into Orion Terminal. As a result, Orion will have a wealth of pricing data, which will be used by NFT Tech in a collaboration to build out the world’s first fair pricing NFT Oracle. Furthermore, Orion will aggregate NFT Tech’s Marketplace into Orion Terminal.

As it stands, the NFT marketplace in particular is deeply fragmented and disconnected. NFT assets are auctioned and traded across wildly different marketplaces, leading to frequent occurrences of illiquidity and devaluation. Orion Protocol has recently announced that it will become the first NFT Aggregator: aggregating all major NFT marketplaces into Orion Terminal. NFT marketplaces will provide liquidity to the Orion network to drive accessibility, liquidity, and volume to the currently fragmented NFT space, benefiting users and marketplaces alike.

NFT Tech, a joint venture from DuckDAO and VYSYN aimed at creating the next-generation of infrastructure for the NFT market, will launch their proprietary NFT marketplace and platform that will allow NFT enthusiasts to easily create NFT assets and launch them into a liquid marketplace. Previously, creators required advanced coding and design skills to build and launch their NFTs. The NFT Tech platform allows NFTs to be created with no coding skills, bringing greater adoption to this growing asset class.

This integration will provide an additional point of access to listed assets through aggregating NFT Tech’s marketplace into Orion Terminal, driving significant volume to their platform alongside visibility for sellers. Typically, most marketplaces take only BTC and ETH as payment methods. On Orion Terminal, traders will be able to seamlessly swap any ERC20 token for an NFT via a complex swap.

Meanwhile, Orion Protocol will provide marketwide liquidity to the NFT Tech Liquidity Engine, a matching engine that can be adopted across the current marketplace infrastructure to incentivize market makers to provide capital to previously illiquid areas. Together, the pair will allow NFT marketplaces to access previously untapped liquidity and operate at greater efficiency.

NFT Tech is launching a sophisticated technology to value NFTs: for the first time, any NFTs can secure a data-driven valuation that is derived from rich historical data. Orion Protocol will feed back price data to NFT Tech for the industry’s first NFT Oracle, further enriching NFT Tech’s pricing engine, enabling fair pricing data across the space determined based on sales and sentiment.

To date, the space has become populated with overhyped celebrity sales, and is at risk of being classed as ‘a bubble’ as a result. Orion Protocol is focused on ensuring the sustainability of the DeFi landscape as a whole, and that includes the burgeoning NFT space. Through this industry-first partnership, this Oracle will feed back price data to marketplaces determined based on sales and sentiment, disallowing malicious actors to create and over-inflate the value of NFTs and ensuring the sustainability of the sector as a whole.

“Orion is an industry-leading trading terminal for crypto asset trading. Orion is unmatched when it comes to providing convenience for cryptocurrency traders. Traders can manage all of their assets from one non-custodial gateway, allowing them to quickly capitalize on the latest market developments from a single point. Orion sets the standard when it comes to bringing greater liquidity and utility to the cryptocurrency ecosystem. We’re thrilled that NFT Tech will be incorporated into their exemplary trading terminal.” KVESTOR, NFT Tech

“We’re incredibly excited to be working with NFT Tech in collaboration on the first NFT Oracle. Through aggregating every major NFT marketplace, Orion will have a wealth of pricing data to bolster NFT Tech’s pricing engine, working together to enable much needed fair pricing data to the burgeoning NFT sector.” Kal Ali, COO + Co-Founder of Orion Protocol

Furthermore, Accretion Ventures, a Venture fund started by the Orion Protocol team, is pleased to announce its first public investment in NFT Tech.

NFT Tech is the next-generation of NFT creation and trading infrastructure. The NFT Tech matching engine will bring unprecedented liquidity to the currently fragmented NFT marketplace. Each of the disconnected NFT markets will be able to tap into previously inaccessible liquidity by adopting a matching engine which incorporates bid-offers books, market makers, and sophisticated NFT valuation tools. NFT Tech will also launch a platform that enables the creation of NFTs with no technical skill requirements.

Sign up to be the first to learn about Orion NFTs.

Win Orion VIP NFTs + more Upon the launch of Orion Terminal, we began a trading competition with...
Get in Touch