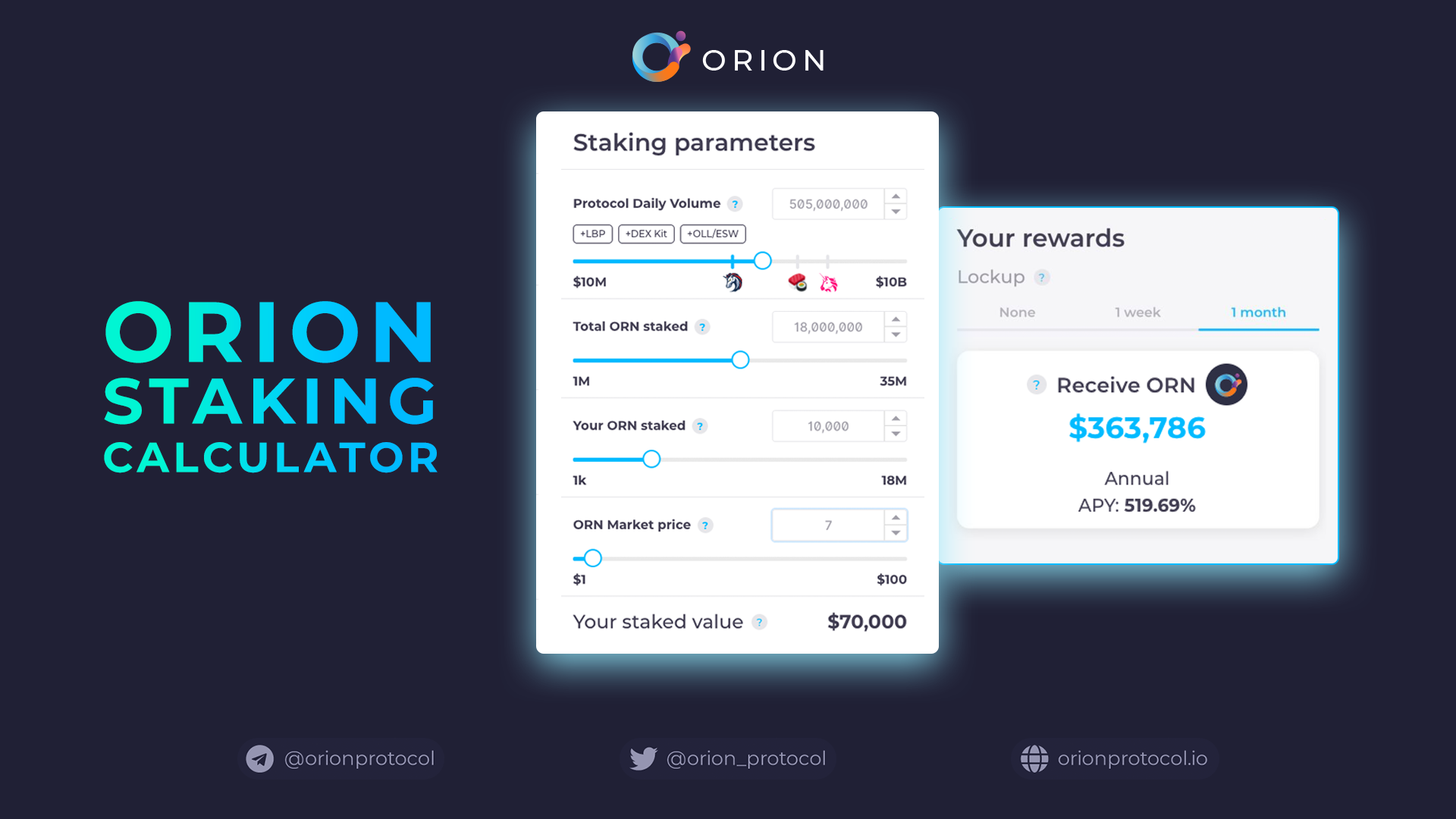 With the launch of Orion Protocol’s main net imminent, Orion has released its staking calculator to allow ORN holders to determine the lucrative staking rewards on the protocol.

Orion Protocol is the DeFi platform building liquidity solutions on the most advanced liquidity aggregator ever developed. Their flagship product is Orion Terminal, the decentralized gateway to the entire crypto market, aggregating the liquidity of every CEX, DEX, and swap pool into one decentralized platform.

Alongside their flagship product, Orion has over a dozen liquidity solutions built on the protocol that have already signed major clients, including a Liquidity Boost Plugin (Polkastarter) Launchpad Liquidity Solution (DuckDAO, DAO Maker, Poolz), and an Oracle solution (Chainlink).

Today, Orion Protocol has released its much awaited staking calculator to allow ORN holders to determine their expected staking rewards, depending on Protocol Daily Volume, Total ORN Staked, Your ORN Staked, and ORN Price. For Protocol Daily Volume, the staking calculator allows holders to determine their staking rewards if, for example, they amassed the same daily volume as SushiSwap. At current market price, this volume would yield over 300% APY for ORN holders. The returns are even more lucrative with increased volume.

What makes Orion different to other aggregators/exchanges is that their Daily Protocol Volume includes volume from flagship product, Orion Terminal, combined with the volume from the dozen other DeFi solutions, some of which will be generating revenue prior to staking launch. ORN holders could yield huge staking rewards from their B2B products alone, as all transactions from B2B products are executed via Brokers.

To some, this could sound too good to be true. The yield-farming industry, rife with rugpulls, has left many skeptical of ‘unbelievable APYs’. Furthermore, some projects are able to offer high APYs due to the inflationary nature of most staking mechanisms, simply minting new tokens for rewards. Instead, Orion’s staking rewards are generated from transactional fees across the protocol’s seventeen revenue streams. Furthermore, ORN is supply-capped at 100m, with strategic efforts in place to remove tokens from circulation.

This is all made possible through Orion's proprietary governance mechanism, Delegated Proof of Broker. Built on a network of brokers and stakers, it fulfills every function on the protocol with the ORN token at its core.

Brokers with exchange accounts (or even exchanges themselves, such as Bitmax, Kucoin, MXC, and Injective) run Orion Broker Software, allowing their computers to automatically execute trades routed from the liquidity aggregator via their trading accounts. Brokers are chosen to execute trades based on how much ORN they stake, and receive a portion of fees from each trade they execute.

This fee is shared with ‘Non-Broker Stakers’, who stake ORN to ‘vote’ for the broker based on the variable reward share offered. Brokers are incentivized to offer attractive rates to Non-Broker Stakers to grow their stake, increasing their chance of being chosen. The Staking Calculator assumes an average return from broker to staker of 20% (the minimum amount required that a broker must share), in addition to a percentage of the total transactional volume of the protocol.