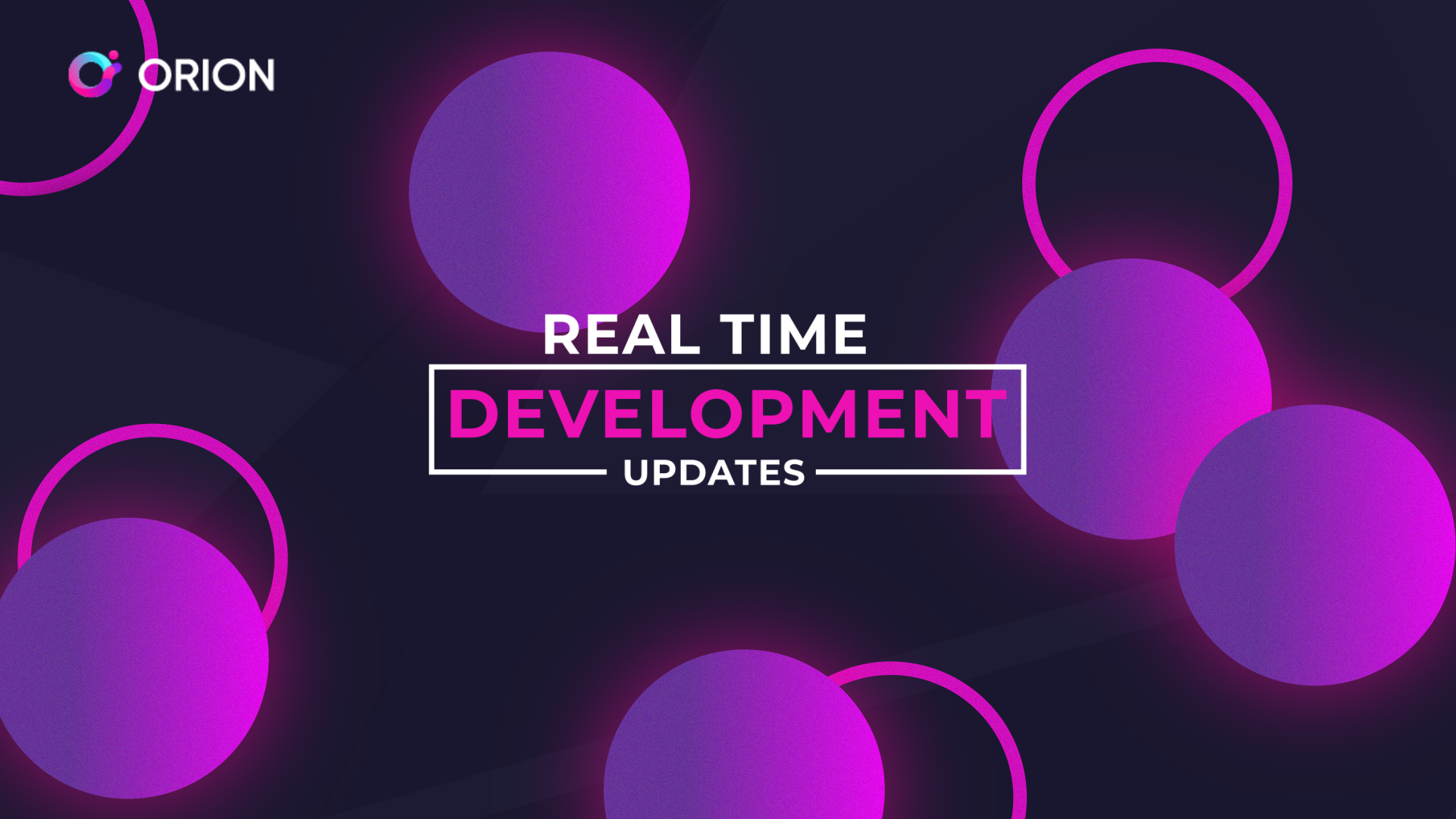 Features prepared by testing by the VIP group

Functions prepared for testing by the VIP group


Integration status (Fantom and others)


Balance streaming refers to the process of real-time communication between the aggregator, internal service that provides blockchain gateway for other services, and back end in order to identify overall tradeable balances between wallet/contract/reserves. The purpose of the Balance streaming work ongoing now is to streamline this process of balance identification and maintenance, where tradeable balances are all obtained from one source - the aggregator which both makes the process easier and takes the load off the gateway service above.

VOB fragmentation implies that there will be more virtual levels in a VOB, but they will be smaller in size, which ultimately leads to better negative spread on the terminal.

Improvements to existing features of the terminal/ protocol

Orion Bridge
The first truly decentralized cross-chain bridge, Orion Bridge is powered by peer-to-peer atomic swap technology. For the first time ever, it will enable users to trade popular native assets across different blockchains without limits, delays, refused orders, blocked funds, or exploits - eliminating the issues associated with other bridges in market. New bridges come to market all the time, but until they are integrated into the backend of trading platforms, we won’t see true cross-chain trading. Orion Bridge has been integrated into Orion Terminal's backend, enabling true cross-chain, cross-exchange liquidity aggregation.

In its first iteration, Orion Bridge has been enabled between Ethereum and Binance Smart Chain. Going forward, we will integrate further chains and plan to move all transaction settlements to a cheap network in a way that remains transparent to users - finally removing the boundaries between blockchains. Learn more and countdown to January 31st here.

Single Network View
To maximize the value of Orion Bridge, the ‘single network view’ will be launching alongside the bridge to enable true cross-chain, cross-exchange liquidity aggregation. This will create one single trading view across integrated chains and exchanges - enabling visibility of all of Orion Terminal’s assets in one place. Exchange orderbooks for select assets across different chains will be integrated into one orderbook. Users only need to connect their wallet once, and don’t need to reconnect when changing chains.

Governance Voting
After the success of our last Governance vote (removing 7.4% of ORN from total supply), a new ‘Governance’ page will be live next week for upcoming DAO votes. This will include votes on new assets, new chains integrations, and more.

Orion SolarFlare
To enable more seamless participation in Orion Solarflare, a new IDO page has been created to allow users to learn, participate, and claim in one place. We have been undertaking significant due diligence on several projects, and two new IDOs have been confirmed for February. Both projects will provide higher allocation than previous IDOs, and stakers will receive a higher allocation ratio. Details on how this will work will be shared soon.

Orion Rebrand
While you might have noticed the gradual roll out of Orion’s rebrand across social channels, there’s far more to come. While existing assets are being updated in the meantime for consistency, an entirely new site and terminal will be deployed. Feedback on Terminal UI/UX has been taken on board - keep an eye out for the preview of our rebranded Terminal tomorrow!

Chain Integrations
The Fantom integration into Orion Terminal is nearing completion, and will be deployed to Main Net Staging not long after the bridge is live. We’ve prioritized Fantom first because of the depth of our partnership and the amount of volume this chain integration can bring to us, but other chains will follow soon after. Fantom will also be integrated into Orion Bridge, as will every subsequent chain. Adding new chains beyond Fantom are more important to us than ever right now, as this will only bolster the value of the bridge, and will enable us to achieve our goal of becoming the chain agnostic gateway to the crypto market.

Orion Wallet Swap SDK
Both the Orion and Fantom development team are working closely on the integration of the Wallet Swap SDK. Its launch is awaiting the final stage of Fantom’s integration into Orion Terminal’s Main Net Staging before deployment, enabling Orion to tap into the millions of users of fWallet and other wallets - expanding access to Orion liquidity.

Orion Whitelabel DEX
The Whitelabel DEX Kit enables centralized exchanges to provide decentralized access to their liquidity on their own branded DEX - bringing Orion liquidity to millions of CEX users. We already have one major CEX ready for launch, with the interface and platform already ready.

Stay tuned for more updates, and watch our most recent AMA below to learn more.

The last few weeks have revealed several strategies put in place by Orion Protocol from ORN supply-reduction initiatives to depositless trading, as well as SolarFlare. Now we have moved into real time development updates, let’s look at the status of some of these features.

Fiat On/Off Ramp: The integration of our previous fiat on/off ramp provider had been completed and we were ready for it to be deployed. However, an unexpected issue with the provider’s off ramp has meant we’ve had to pivot swiftly to a new provider to ensure full functionality from launch. Integration has already begun with the new client, with expected deployment December 20th (with a 0% fee campaign). 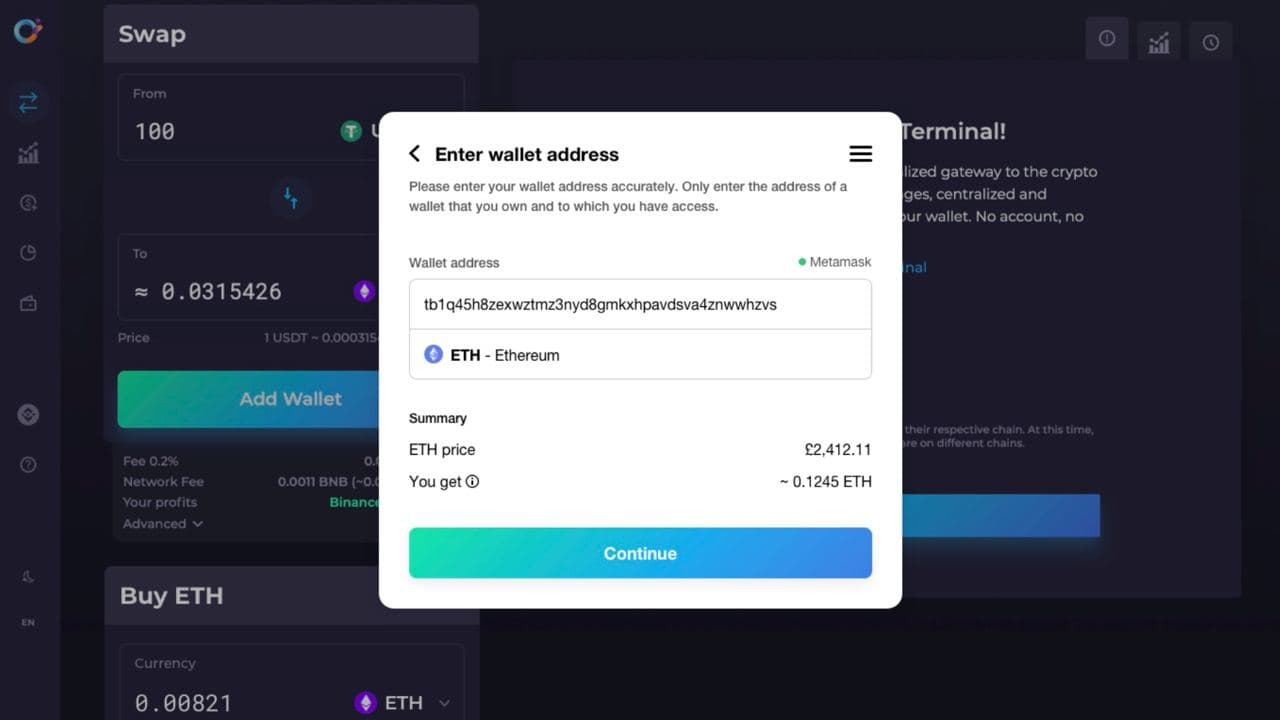 Soon to be deployed to VIP testing environment:

Protocol Governance: we will soon be releasing a series of governance votes for ORN holders and stakers pertaining to supply reduction, next stages of development, etc.

Single Network View: ‘Single network trading view’ (viewing all assets across chains) has been implemented already on the backend and we are in the final stages of testing prior to deploying to our VIP test environment.

New liquidity sources: onboarding of a major CEX is almost complete. Onboarding of other CEXs and DEXs also in the works, to be deployed to the VIP testing environment after the launch of Orion Bridge.

Take a look at our recent Dev AMA:

This month will bring about a significant number of changes to the terminal, including depositless trading, fiat on/off ramp, additional liquidity sources and pairs, preparing for Orion Bridge, and more. Alongside continued development updates and AMAs, we are moving towards ‘real time’ updates of development in order to communicate progress and changes as they occur, and as effectively and frequently as possible.

Fiat On/Off Ramp Aggregator: Once depositless trading has been publicly released, a fiat on/off ramp aggregator will be deployed on Orion Terminal - aggregating every major fiat gateway. This is currently in the final stages of UI optimization before testing and roll out. 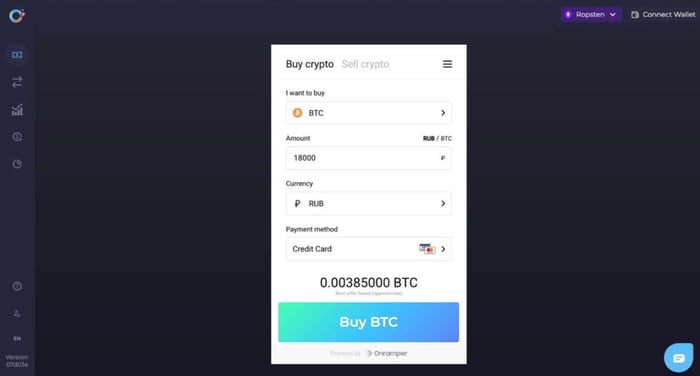 Single Network View: Shortly after the release of depositless trading and fiat on/offramp, the ‘single network view’ of the terminal will be released, enabling one single trading view for assets and pools on existing and new chains. Users will only need to connect their wallet once and don’t need to reconnect when changing chains.

Orion Atomic Swap Bridge: The back end for Orion’s atomic swap bridge has been built, with UI developments underway ahead of launch.

Additional liquidity sources: Further progress made with the smart contracts to more effectively onboard new sources of liquidity and assets.

Bug fixes: Various low level bug fixes have been improved across the Terminal, including:

Keen to understand what’s next? Watch our latest Development AMA.

This next month will bring about a significant number of changes to the terminal, including depositless trading, fiat on/off ramp, additional liquidity sources and pairs, preparing for Orion Bridge, and more. Alongside continued development updates and AMAs, we are moving towards ‘real time’ updates of development in order to communicate progress and changes as they occur, and as effectively and frequently as possible.

The development team has just deployed the following improvements to Orion Terminal:

In our recent Development AMA, Lead Backend Engineer Boris Vanin shared some of the important changes already implemented and what’s next for the development team, including the following updates planned for the coming weeks:

Depositless trading:
- Now live in mainnet staging environment
- VIP NFT holders will be briefly testing this in the next few days before public deployment

Single trading list / transparent network feature:
- One single trading view for assets and pools on existing and new chains
- Users will only need to connect their wallet once and don’t need to reconnect when changing chains
- This ‘transparent network feature’ is a key development prior to the launch of Orion Bridge in order to create a seamless cross-chain experience

Alongside the above, there's even more in the works as shared in last week's Development AMA.