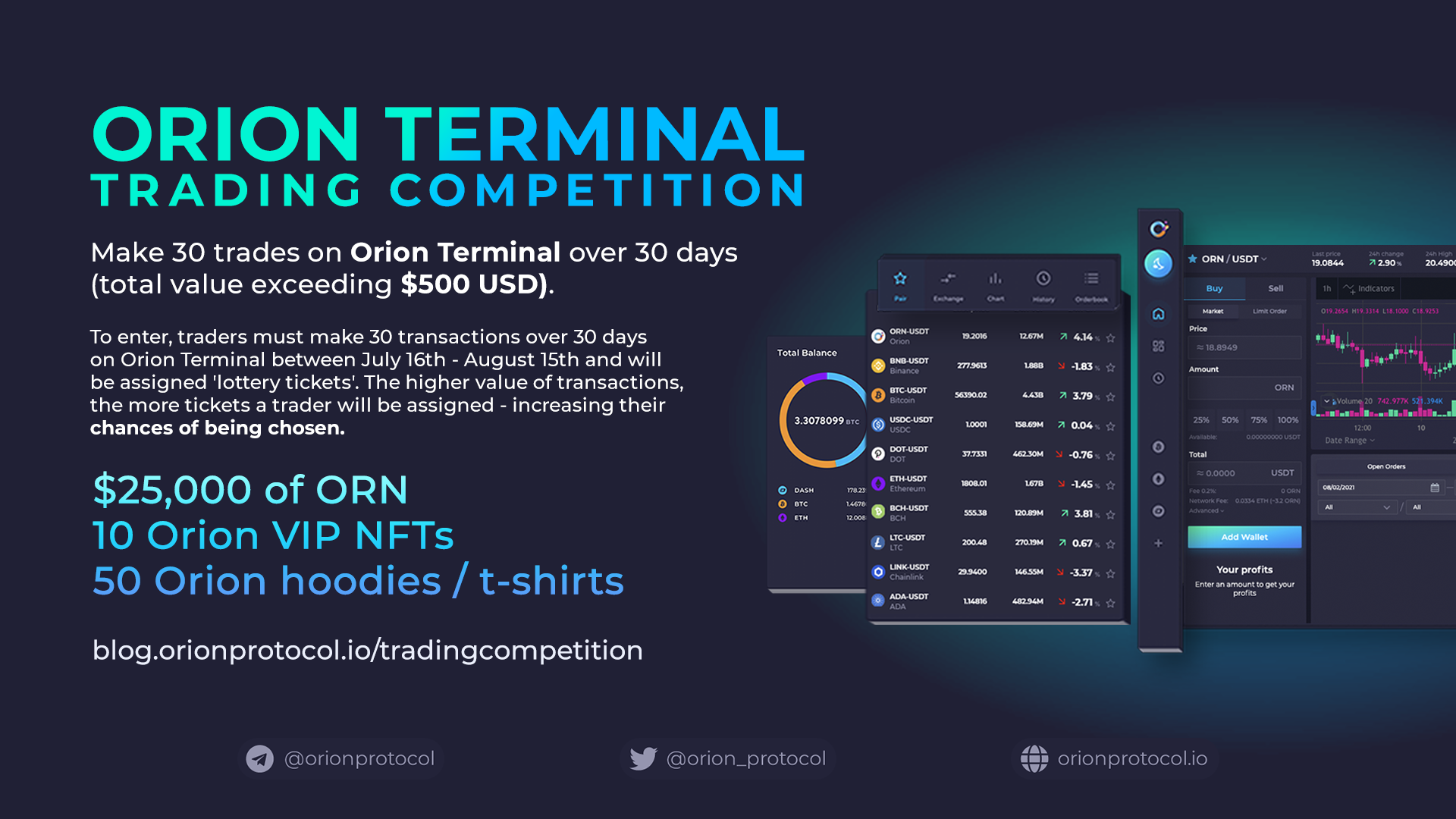 A YEAR OF ORN Trading Competition

To celebrate a year of ORN, we're launching a trading competition from today with $25,000 ORN, Orion merchandise, and the last remaining Orion VIP NFTs up for grabs. To enter, simply trade on Orion Terminal. A year ago today, Orion Protocol completed its raise, conducted its TGE, and ORN was born. Since then, we've amassed over 60 partners (including Cardano, Chainlink, Binance, Forbes, and more), launched the first decentralized portal to CEX + DEX liquidity with Orion Terminal, launched our AMM solution Orion Pool (with 45% of circulating ORN locked on the terminal), announced a dozen upcoming DeFi solutions (including our industry first NFT Aggregator), and so much more.

We launched with the goal to create the decentralized gateway to the digital asset market, and that’s what we’ve been building ever since. In the wake of hacks and CEX shutdowns, growing concerns regarding KYC, increasing pressure from governments to shut down regional access to CEX liquidity, Orion Terminal is the first and only platform providing decentralized access to centralized liquidity - enabling users to seamlessly trade across both centralized and decentralized liquidity sources, from anywhere in the world, directly from their wallet and without an account or KYC.

We’re building the future of trading, but we’re just getting started.

To celebrate a year of ORN, we're launching a month-long trading competition starting today - with $25,000 ORN, 50 Orion hoodies / t-shirts, and the final Orion VIP NFTs up for grabs.

Orion VIP NFTs unlock early access to every B2C solution built on the protocol, including new chain integrations, lending, margin trading, and more. Current NFT holders have had early access to staking, Binance Bridge, and more, ahead of public access. NFT holders also have access to an Orion VIP group with senior members of the team, and will be privy to certain Orion updates and developments.

- Make 30 trades/swaps over 30 days (July 16th - August 15th)
- Trades can be made on any day(s) over the 30 day period
- Total value of all transactions must exceed $500 USD
- The higher value of transactions, the more ‘tickets’ assigned
- Winners selected at random from all ‘tickets'
- Sign up below to be notified if you win
- Trade now: trade.orionprotocol.io

Beyond the trading competition, why trade on Orion Terminal?

✅ Global access to major centralized exchanges, directly from your wallet
✅ Trade across centralized and decentralized liquidity sources for the first time
✅ Best price for your trades, every time
✅ No account, no KYC

Sign up below to enter Orion Terminal's Trading Competition. Then, get trading.

Win Orion VIP NFTs + more Upon the launch of Orion Terminal, we began a trading competition with...

A Trading Competition Success on Orion Terminal Yesterday marked the close of a successful trading...

Orion Protocol: new opportunities for arbitrage
Get in Touch